So, the Vindalunar tweet counter has reached 100%. When it happened, the display fucked up for a short while, and then the webcam feed was replaced by a countdown. So, we were counting down to a countdown. Brilliant. Presumably, the smeg balloon, or whatever it is, will be launched at 1:30pm BST.

EDIT: It’s done. Read on for a full report. 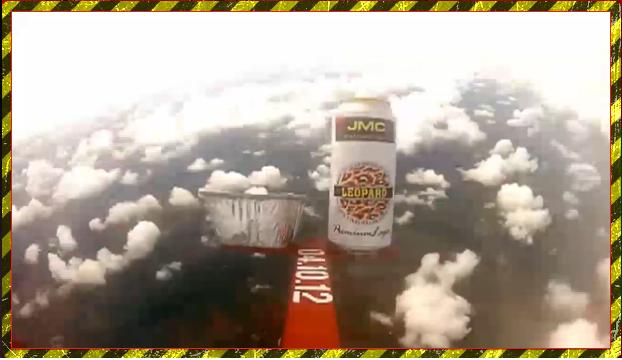 13:03 Yes, hilariously, a brief snippet of the launch taking place was accidentally broadcast on the webcam feed at around 1pm. I was able to see it, as I hadn’t refreshed the page to get the countdown. As you can see from the picture, this confirms that the launch date of Red Dwarf X is Thursday 4th October 2012.

Let’s watch the thing at 1:30pm anyway. This is a very important lesson – TV lies to you. 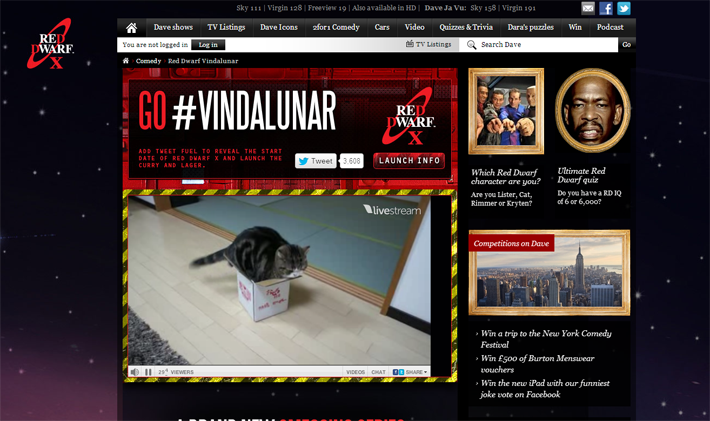 Yes, somehow they managed to embed something called Vinesauce Vidya, which was showing an old woman calling EA Games ‘motherfuckers’, interspersed with footage of cats in boxes and horses pissing about. This is utterly staggering. Presumably it was some sort of copying and pasting error; with ‘Vinesauce Vidya’ being close to ‘Vindalunar’, they would have probably been next to each other in some sort of big list. But… Jesus wept. That’s quite a monumental error.

When this whole shebang started last Friday, I was cynical about the nature of this stunt, simply because of the whole curry-and-lager thing. It’s a rod that’s often used to beat Red Dwarf by the Andrew Collinses of this world – the myth that it’s a show about a slobby bloke in space who says ‘smeg’ and eats curry, which wilfully ignores the extraordinary sci-fi concepts, the fully evolved character comedy and the superb ensemble cast. But I at least expected this dodgy idea to be implemented well, and it simply hasn’t been.

I must admit that the shots of the thing actually on the edges of the Earth’s atmosphere looked great, but those few moments aren’t enough to nudge my summary of the Vindalunar campaign away from the status of: an embarrassment.

At the time of writing, the fucker is still up there in space. I’ll keep watching to see what happens, and I’ll update if it comes crashing down to Earth and destroys someone’s house.

15:27 Oh for FUCK’S SAKE! We spend nearly two hours watching some curry and lager floating around in the sky. Then at around quarter past three, finally something happens – the balloon and the payload become detached from each other, and the thing started falling to Earth! Hooray, this will be exciting!

Except, the fuckers then switched off the feed within less than a minute, replacing it with this:

You’ve got to be fucking kidding. We wait around for all that time, waiting for some sort of conclusion to this broadcast… and they cut away from it. What an absolute mess. Just putting some curry and lager quite high up in the air isn’t enough; there needed to be something to round the event up.

And then the regurgitated cherry on the shit-smeared cake: THAT’S THE WRONG DATE, IDIOTS. THE ENTIRE POINT OF THIS EXERCISE WAS TO PUBLICISE THE START DATE OF THE SERIES, AND THE FINAL IMAGE IS OF THE WRONG DATE.

Honestly. Several of us G&Ters work in television, and we understand that it’s not always easy, and that it’s just a bunch of fallible humans working behind the scenes, and that mistakes can happen. But there have been so many mistakes today that we can only describe #vindalunar as an utter failure.

The company behind this campaign is called Five by Five. They emailed us a press release earlier, asking if we’d be covering the story. We don’t think they’re going to like our coverage…

AND FINALLY It would appear that Naylor Minor is similarly annoyed:

My thoughts are same as everyone else’s. Crude idea, horribly executed.

Good to know it’s not just us being miserable bastards. All in all, today’s been a bit of a bummer, hasn’t it, sirs?

130 comments on “The brilliant #vindalunar campaign reaches its tedious conclusion”

“The only extra not really worth watching all the way through is the “fan films” feature, which is a 'bit like sitting through an embarrassing sixth form revue! You'll see what I mean...” - "A Customer", amazon.co.uk