We must say, this whack-a-mole game of spotting details about the Red Dwarf Special is proving to be rather fun. There was a time when major production decisions were revealed slowly and calculatedly in co-ordinated releases, but now you just have to wait for someone to chuck it all on social media, probably not realising that analysing the contents of their otherwise benign posts is incredibly interesting to the hardest of hardcore fans like us. Let’s enjoy it while it lasts and take a look at the short video posted by Danny John-Jules this morning. It’s of him, Chris and Robert strolling through Pinewood and chatting about the filming they’ve just completed. But Chris is in full costume and Robert is in full make-up.

Anyone seen ⁦@CCfunkandsoul⁩ He was last seen ordering a cab and a curry in Iver Heath near ⁦@PinewoodStudios⁩ “We’re a man down!!” If you see him do not approach him. He’s dangerous, armed with a box full of CD’s and he’s not afraid to use them!! 😾 pic.twitter.com/1CsRRciiAK

In anticipation of this possibly being taken down in the manner of Danny’s accidental call sheet photo last week, which incidentally reappeared in cropped form today, we’ve taken the liberty of proving a couple of screen grabs and a transcript. 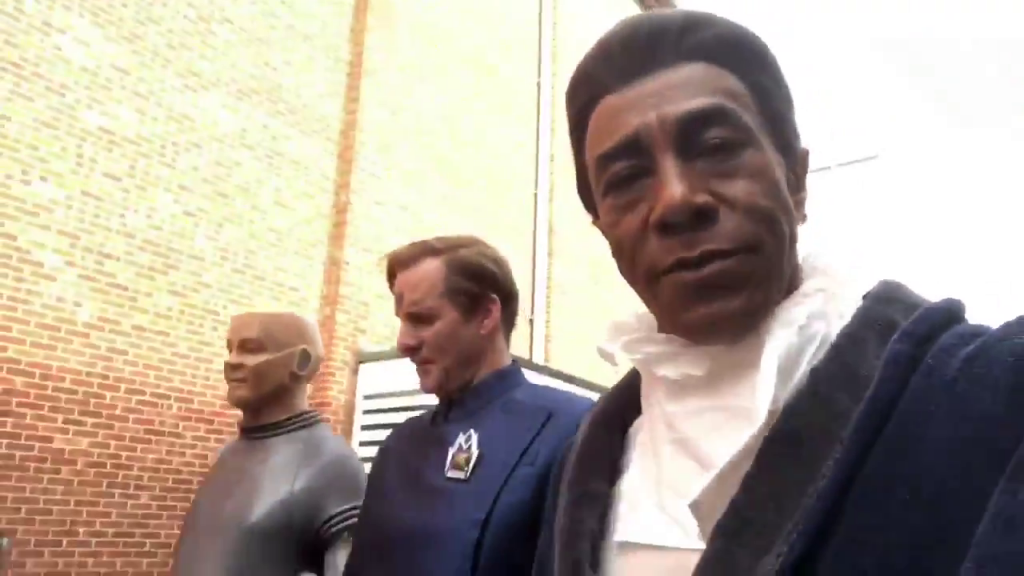 DANNY: Two lines and an action sequence. Bobby, you are turning into the Terminator.

CHRIS: Well, we did quite a… quite a lump yesterday.

ROBERT: You did a big lump yesterday, I know, you did a lot. That were proper, that were.

I’m not sure I want to hear about Chris doing a big lump, frankly, though it’s a common problem as one gets older. So from what we can tell, Rimmer’s uniform appears to be the same as it was in XI and XII, although I’ve never been the best at spotting any minor differences. Danny is covered up with a dressing gown and napkins, so no reveal of a new suit, although he did also post a teaser the other day that suggests pink furry pom-poms may be involved at some point. While we’re at it, there was also a photo of Chris’s syrup mid-application, and thankfully it’s a lot more seamless by the time they’ve finished. Well, either that or this Special is a cross-over with Peaky Blinders.

But of course, the most interesting feature of the video is probably the latest iteration of the Kryten mask, and while it’s hard to judge on mobile phone footage alone, it looks pretty decent to me, certainly retaining the classic shape from most angles. Although it is slightly off-putting to see him without the outer shell of the costume, with Robert’s real and actual nipple nuts glimpsed poking through the metallic fabric. Unless that’s part of the action sequence.

69 comments on “Two lines and an action sequence”

There are currently 3 users online.

“you've got your head up your big fat arse” - Squidy