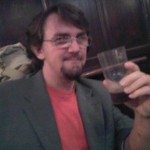 “There are f's in there and t's that are just wholly wholly unnecessary” - Keir Shiels, Official Webboard