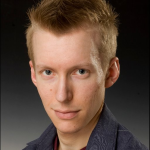 “Yes it was me, and this will be my last visit to this sad little site for people who haven't got anything better to do.” - Norman Lovett (who was in RD when it was funny)